Is Arteriosclerosis Unique to Our Modern World?

Arteriosclerosis is the thickening and hardening (and subsequent loss of elasticity) of the walls of the arteries (atherosclerosis, is the formation of plaques consisting of cholesterol and other substances on the arterial walls).

Signs of artery disease in Egyptian mummies was believed to support the idea that a life of leisure, with plenty of rich food, is the main cause of heart disease. Broad studies found signs of heart disease in the remains of many people — even the best-off ancient Egyptians suffered from malnutrition and a preventable disease (can be preventable in our era anyway). 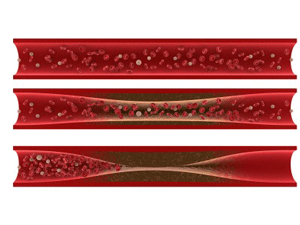 Arteriosclerosis of the arteries

But that may be the point. All through the ages, those with the most affluence were able to eat richer food and more of it. Although they ate vegetables and fruits aplenty when available, they also indulged in a lot of grain products, including beer. Almost everyone consumed beer and bread as staples and central to their diet, even children. However, the wealthy would have eaten more luxury foods — meat, butter and cheese. The preservation of these foods with a lot of salt is noteworthy also.

Actually, similar levels of atherosclerosis in different cultures around the inhabited world were found, suggests that atherosclerosis may have been far more common in the ancient world than previously thought.

Inflammation may be the common link

Doctors know that infection can be linked to heart and artery disease. One marker of heart disease is inflammation, as measured by a compound called C-reactive protein which can be tested for by your doctor with a simple lab test.

Could infection have somehow kept ancient arteries inflamed and prone to clogging? Most likely. And their diet, if heavy in grain and alcohol, would have also added to the inflammatory causes of their cardiovascular issues.

Some researchers have postulated that atherosclerosis (plaque in the arteries) in itself is not harmful. They say it takes a ‘catalyst’ to go from atherosclerosis to an actual heart attack or stroke. That catalyst, most people now believe, is ‘inflammation.’ There is a possibility that an inflammatory response to the frequent parasitic infections common to ancient Egyptians might have predisposed them to coronary disease too.

Causes of Inflammation common to both our Western culture and the ancient Egyptians:

We can also add in some factors that are unique to our own modern lifestyle:

Of course, it’s clear that disease has always been prevalent due to sanitation issues. However, other possible causes of inflammation have plagued us for eons too. But if we reduce some of the known lifestyle factors responsible for promoting inflammation in our bodies, we can truly help prevent cardiovascular disease and many other chronic diseases such as cancer, obesity and diabetes.